Yesterday we went over to my nanny and grampy’s for father’s day. After dinner I took them for a nice walk in the forest. The weather was kinda weird, it was supposed to rain but instead it was crazy hot and humid which I didn’t like at all. Here are a few pics from our walk which my Uncle Andrew took.
You’ll notice I’m wearing the evil halti, apparently on family walks I get ‘too excited’ for mummy to handle – what a weed! 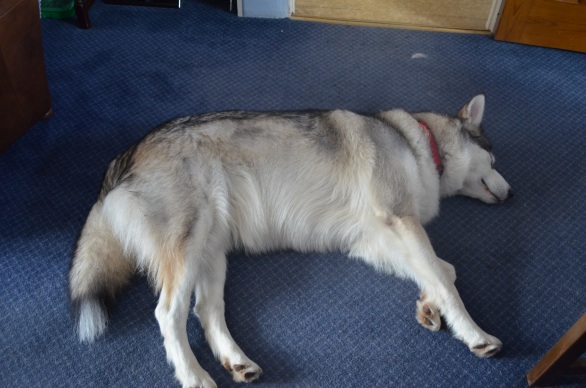 Mummy says this means I’m not longer a puppy. I think that’s pretty sad, ideally I’d like to be a puppy forever! But apparently I have to ‘grow up’. Though being adult sounds pretty boring to me! I may be heading for adulthood, but inside I’ll always be a puppy:-)

I thought I’d share some of my favourite photos from the past 18 months. 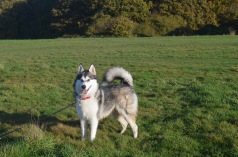 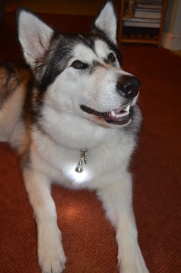 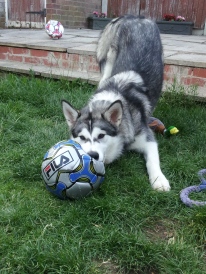 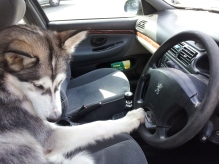 when I’m driving in my car…

at 9 weeks in the snow

I used to hate the paddling pool mostly because to fill it up the evil water snake would come out. When I was finally brave enough to get out of my hiding place, I tended to use it as a giant water bowl rather than to paddle in!

But it was pretty hot yesterday so I decided to paddle my feet. Mummy and daddy were completely shocked.

Maybe next time they’ll fill it up a bit more though.

I could get used to this!

Its grey and drizzily here, but I don’t care cos its Friday:-) Fridays are great because they mean its the start of the weekend.  But this Friday is especially good because its another bank holiday weekend in the UK, so mummy and daddy will be off work on Monday woohoo!

This weekend mummy and I are going to try to design our cake for Henry over at My Three Moggies, his birthday is next week and he has a cool contest going on to choose the best birthday cake. Neither me or mummy are very good at baking, and we have very different ideas about ingredients we should use so this should be fun…and messy! What are you putting in your cake?

I was hoping to include a layer of pigeon, but I haven’t been able to catch one yet. I gave it a good go this morning, but the reason I didn’t get any is because mummy is too noisy and scares them off.

This is me checking out a few before I gave chase.

Hope you all have a great weekend. And if you have any tips on how to catch pigeons, then let me know!

Thank you to everyone who helped with the ‘save Leo’ campaign. Whether you re-blogged, posted, tweeted, facebooked, donated money, items, bought raffle tickets or placed bids in the auction. It has all helped and made it a huge success. And a massive thank you to Mollie who organised it all. Not only have we helped to save the life of this poor kitty but in true Mollie-style we’ve had loads of fun doing it too!

Have you been over to Mollie‘s to check if you won the raffle? No? Then what are you waiting for!!

Because of the raffle and auction, I completely forgot to post about a couple of awards I was given. But better late than never!

First of all the lovely piggies at Hutch a Good Life gave me the Shine on Award. Thanks guys! 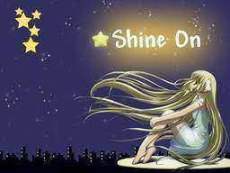 And next is the Dragon Loyalty Award, which Nikitaland gave me. Thanks Nikita!

There are rules for these awards, but I’m being lazy and have ignored the questions which accompany them! So I’m just going to pass these to:

If you don’t already read their blogs, please stop by and say hello.

Oh, and one last thing: I got this lovely parcel from Sammy! I won the word contest at his pj party and tied on the jellybean guessing competition! 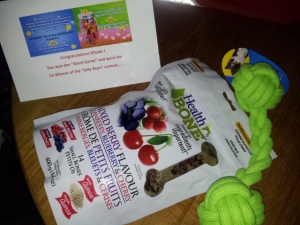 meanie mummy hid these away:-(

Have a great day everyone, and don’t forget to stop by Mollie‘s for all the news from the raffle and auction.

As well as the auction (see yesterday’s post), we’re also holding a raffle to raise funds for Leo. You can read all about Leo over at Savannah’s.

Tickets cost $2 each or $9 dollars for 5 (All proceeds are going directly to Savannah for the vet bills of Leo. Please see yesterdays post for details)

To get your tickets, email me at misadventuresofmisaki@yahoo.co.uk

I will then issue you your raffle ticket number and will supply you with the paypal details to make your payment.

Everyone can enter, so don’t delay join in today!

The winner’s will be announced on Wednesday 22nd May.

Don’t forget about the auction, we’re still open for donations. The auction will take place on Monday 20th, so please stop by to take a look and hopefully buy something.

You can also buy tickets and donate to the auction over at Mollie’s. And Sammy is taking donations too.

Thank you to everyone who has got involved so far.

In the meantime I thought I’d introduce to you a new buddy of mine, he’s a 16 week old basset hound puppy. Isn’t he a cutie.

This pic makes it look like I was about to go demonic on him, but actually he spent most of the time sitting on my head BOL.

Have a great Friday everyone! 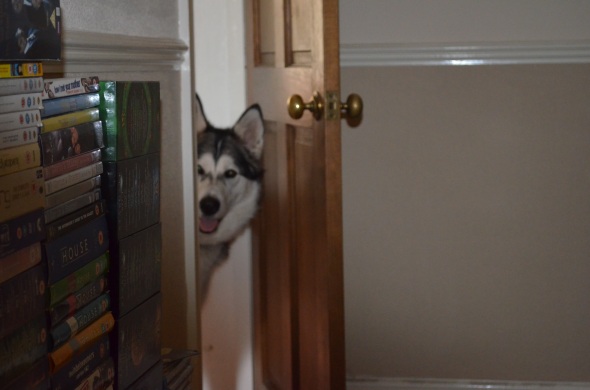 Due to the crazy weather we’ve been having, I’m blowing my coat again hehehehe! I love it when our carpet changes to that lovely shade of Misaki:-) Here’s a pic of me having a nice brush. And if last time is anything to go by, then this is just the beginning!

I’ve been saving up all my fur as Mummy has found someone locally who can spin it. I’m hoping that in the not too distant future she’ll have enough to make a Misaki scarf. How cool will that be!

Hope you’re all having a great day. Mollie’s shop is opening today so don’t forget to pop by for the grand opening!

Today I went to the All About Dogs show in Brentwood.

We got there early and only stayed a couple of hours as it started to get hot and was crazy busy. But I had loads of fun. I made lots of friends, most of all with a giant malamute called Mick – seriously he was twice the size of me! I also had a go at an agility course. I wasn’t too sure at first but by the end of it I started to get the hang of what I was supposed to do, I think daddy was more tired than me lol.

We had such a great time, apparently there’s another in July so am hoping we can go to that one too:-)

What did you get up to today?

me and miska the husky 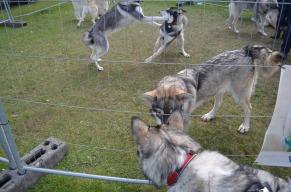 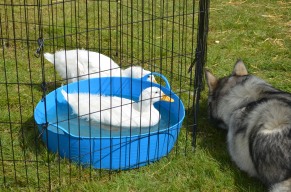 You’ll be pleased to hear that my park has now fully recovered from the ‘trashing’ it received at the weekend and all is back to normal! So I decided to do my first Park Day 2.0 post which is hosted by my boydawg Gizmo and the lovely Finn.

I picked bingo card 4 and went for an easy row. 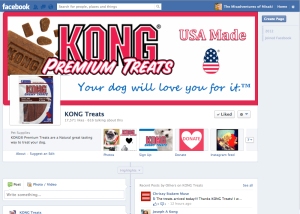 3. Park bench. This marks a free space but I thought I’d include one anyway:-) – CHECK

4. Find a monument or sculpture. There are a couple in my park but I chose the war memorial – CHECK

5. Take a walk in a nature reserve. Yep we have one of those too – CHECK 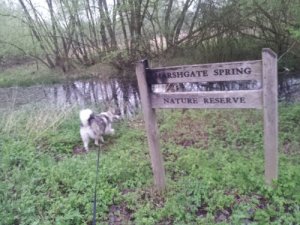 And that makes BINGO! So there we have it, my first park day 2.0 post. Are you taking part?