My bestie Mollie and I are co-hosting a Valentine’s poem competition and I hope you will all join in.

All you have to write your version of the last two lines of this classic valentine’s poem:

You have two chances to win, one on my bloggy and one on Mollie’s, just write your poem in the comments below.

The closing date for entries is the 8th Feb and voting starts on the 10th. The winner will be announced on the 14th feb. You could win one of Mollie’s fab ornaments.

No, not really. Sadly mummy and daddy had already polished them off before I got to have a look in – what meanies they are!

Don’t forget to enter Doggy‘s fabulous competition to win some of Mollie‘s dog treats and bandanas!! If you haven’t already checked it out, you have to make a very short story out of these crazy words:

‘After successfully catching a catfish from the swamp, Mollie returned home to make her gumbo. She stirred the pot while knocking back a shot of Patron and accidentally elbowed in an extra garlic bulb. Oh well, she thought, at least that will keep the vamps away tonight!’

What will you write??

I’ve mentioned a few times that Mollie‘s mummy makes the most nomalicious homemade treats. And she also makes pawesome bandana’s like the one I’m wearing in my avatar pic:

Anyway, the reason for mentioning this is that Doggy, the self-confessed competition addict, is finally hosting his own contest! And not only that, there are TWO prizes to be won, each consisting of £20 worth of Mollie‘s treats and bandanas!! How cool is that!

To find out how to win, head over to Doggy’s for all the details. And in the meantime you might want to stop by Mollie‘s to start working out what you want if you win. Or you could just buy some anyway:-) 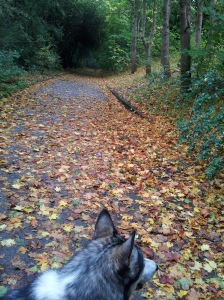 Mummy and I have just come back from a nice walk along the cycle tracks, doesn’t it look pretty with all the leaves scattered about?

I’m now chilling and waiting for her to start baking – yes you heard me correctly! Mummy, who NEVER cooks, has decided to use our spare pumpkin to make some treats for me!! Depending on how they turn out I’ll be reviewing and critiquing those later!

In the meantime, the pumpkin that did get carved is now up for show in Sammy’s pumpkin competition. It seems that Litchi’s gremlins have hot-footed themselves over to Sammy’s poll and my entry has disappeared. It is featured separately though but if you want to vote for me you need to say so in the comments. Check it out, there are some seriously good entries!

Have a good sunday!

Queen of the Damned

Wooohooo! Despite my daddy saying orange is not my colour, I won the Piggie’s Cavy Crypt contest for my pumpkin impression BOL and I got this cool award:-)

Congrats also to Easy, Sammy and Duke they won their categories too.

Mummy is back to work today unfortunately, so I’m spending my day catching up with all your bloggies.

Don’t forget to vote in Mollie’s About US competition. If you vote for my entry you won’t save the planet, won’t stop endangered animals from becoming extinct or help starving children. I’m afraid it will take more than Mollie’s new bio to do that. But you would put an extra wag in my tail, that’s got to count for something surely 🙂

I’m having a lazy morning as I’m waiting for mummy to come back from the bake sale, then nanny and grampy are coming over (woohoo!) and I’m going to take them for a nice walkie:-) Then once we get back and they crash out on the sofa, I plan to munch all the cakies – its a totally brilliant plan!

While I’m out don’t forget to check out the spooky photo gallery over at Molly the Wally’s and then head over to the piggies to vote in their Cavy Crypt Pet Photo contest and lastly, head to Mollie‘s so you can get spooked if you haven’t been already, and also vote in her About Us competition! You can’t say I don’t keep you busy BOL.

There’s a photo competition going on over at Mollie‘s, so please stop by and vote for your favourite if you get a chance. There are no names on the photos so you have to guess who’s who. I’m in there somewhere, wonder if you can figure out which one’s me??

And the winner is… 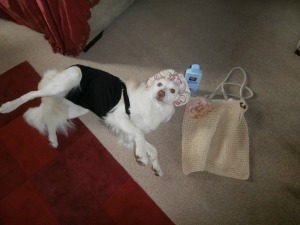 And in very close second was Doggy

Please could you both let me have you addresses and I’ll get your prizes off to you.

Please vote for your favourite in the sunshine photo competition.

Voting will end Friday 3rd August at 10.30pm (UK time) so please get your votes in soon!!

Good luck to all the contestants

This is my first poll, so paws crossed it works!!

Unfortunately I didn’t win the dog scooter – but thank you all so much for voting for me. But it doesn’t matter cos Mummy is going get me a sled for when it snows then I can have lots of fun pulling her down the hill in the park…as long as I don’t get distracted by pigeons BOL.

Anyway, in the meantime, my sunshine photo competition ends tonight at 10pm (UK time) so please get your entries in before them and I’ll aim to post them all tomorrow morning.

I’ve had some great entries so its going to be a hard choice to pick a winner – luckily that’s your job and not mine!!