Merry Christmas from Me :-)

The other day, the lovely people at Pawsome Box sent me one of their fab boxes to enjoy and review 🙂 As you can see my box was filled with some cool stuff: 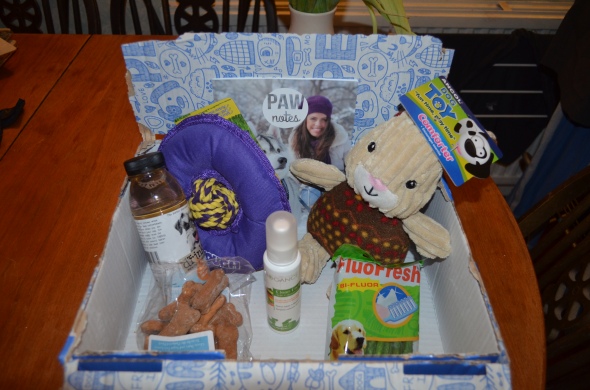 Toys.
I am a  huge sucker for squeaky toys, so this guy was a big hit with me. 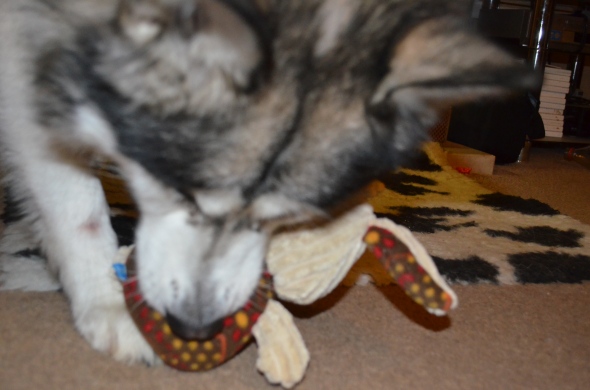 And you’ll be pleased to know he’s still squeaking…at least for now!

Treats
These yummy and practical sticks help to keep my teeth clean and breath fresh. it’s a win-win as far as I’m concerned. 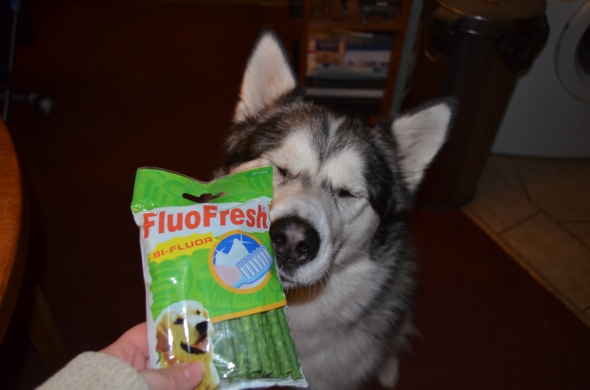 The bone-shaped treats are nice and crunchy. Mummy was hoping she could break these up and use them as treats on our walkies, but being so hard meant I had to eat them whole. What a shame hehe!

Clean Pads Paw spray
I’ve got a cream that mummy sometimes rubs into my paws but it tastes so good I just lick it straight off. This spray is supposed to do the same thing as the cream.

The bottle claims to strengthen, moisturise, help heal and can be used daily. It smells very fresh and clean and mummy likes the idea of it alot. Plus not being a cream I’m less likely to lick it off. But I’m not a big fan of my paws being touched at the best of times, I just about suffer the cream. And I definitely don’t like my paws being sprayed. So this hasn’t been a huge success so far. But mummy hopes that  I’ll get used to it. We’ll see.

This is something I hadn’t heard of before, and in all honesty I’m still not sure what to make of it. Their website states that: The light infusion of herbs in ‘drinkies’ water provides dogs with added health benefits – helping to aid digestion and the absorption of nutrients, providing calming properties and helping support immune systems, making ‘drinkies’ the perfect healthy refreshment for dogs.

I did try a few sips but I wasn’t overly impressed. Really they should make a gravy bone version – I would lap that up! But I might give it another go. Do you think this would be something you’d like?

Anyway, head over to Pawsome Box for more info on their boxes and special offers.

Pawsome Box provided me with one of their boxes for review, but did not otherwise compensate me for this post. The views and opinions expressed in this post and on this blog are entirely my own. 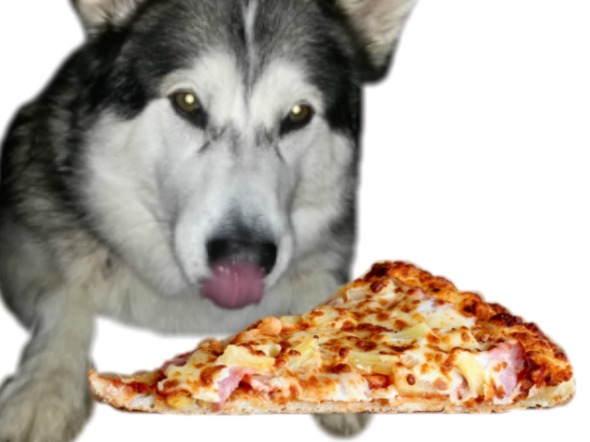 I am deeply saddened by the news that Alfie as in one half of Mollie and Alfie is no longer with us.

Knowing Alfie as we do, I doubt it’s the last we’ve heard from him. Even so I’m sending lots of love and hugs to Mollie and her family at this sad time. I hope you will too xx

WW: have you seen a gravy bone anywhere?